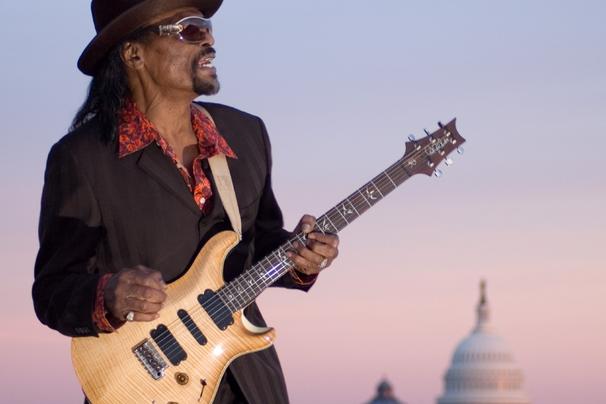 Chuck Brown (born August 28, 1936) is a guitarist and singer who is affectionately called "The Godfather of Go-go". Go-go is a subgenre of funk music developed in and around Washington, D.C. in the mid- and late 1970s. While its musical classification, influences, and origins are debated, Brown is regarded as the fundamental force behind the creation of go-go music.
Brown's musical career began in the 1960s playing guitar with Jerry Butler and The Earls of Rhythm, joining Los Latinos in 1965. He still performs music today and is commonly known in the Washington, DC area. Brown's early hits include "I Need Some Money" and "Bustin' Loose". "Bustin' Loose" has been adopted by the Washington Nationals baseball team as its home run celebration song, and was interpolated by Nelly for his 2002 number one hit "Hot in Herre." Brown also recorded go-go covers of early jazz and blues songs, such as "Go-Go Swing" Duke Ellington's "It Don't Mean a Thing If Ain't Got That Swing", "Moody's Mood for Love", Johnny Mercer's "Midnight Sun", Louis Jordan's "Run Joe", and T-Bone Walker's "Stormy Monday".
He has influenced other go-go bands such as Big G and The Backyard Band, Rare Essence, Experience Unlimited (EU), Little Benny and the Masters, and Trouble Funk.
I'm so excited for Chuck Brown this year he is nominated for his first Grammy ever and last year he made his late night television debut, performing with the Roots on Late Night with Jimmy Fallon, and gave a halftime show at a Redskins game. Good Luck to the father of GoGo on his Grammy nomination and he is a true inspiration to all musicians in the D.C metropolitan area.