Skip to main content
Posted by Posh The Socialite February 08, 2011 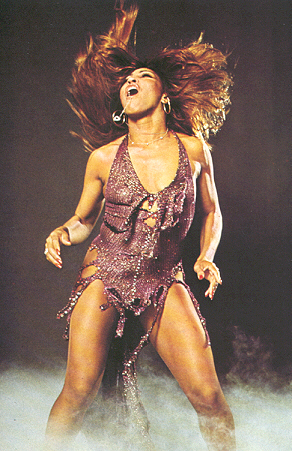 Tina Turner (born Anna Mae Bullock; November 26, 1939) is an American singer and actress whose career has spanned more than 50 years. She has won numerous awards and her achievements in the rock music genre have earned her the title The Queen of Rock 'n' Roll.
Turner started out her music career with husband Ike Turner as a member of the Ike & Tina Turner Revue.[4] Success followed with a string of hits including "River Deep, Mountain High" and the 1971 hit "Proud Mary". With the publication of her autobiography I, Tina (1986), Turner revealed severe instances of spousal abuse against her by Ike Turner prior to their 1976 split and subsequent 1978 divorce.
After virtually disappearing from the music scene for several years following her divorce from Ike Turner, she rebuilt her career, launching a string of hits beginning in 1983 with the single "Let's Stay Together" and the 1984 release of her fifth solo album Private Dancer.
Read More
Check out Tina Turner in Better Be Good To Me video: