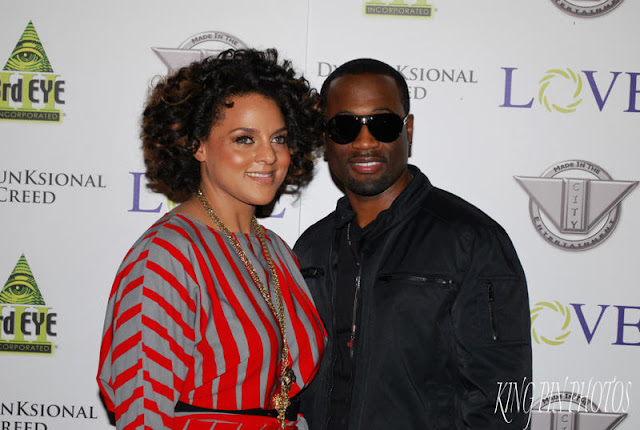 DC's young, contemporary and cosmopolitan professionals will have one more happy hour option for Wednesday afterwork and evenings.  A partnership of two event planning and entertainment companies launched "Industry - The Celebrity Afterwork" weekly event to be held at Love the Club in Washington, DC.


Guests will enjoy a three part event consisting of a happy hour, live concert series by new big band sound group, DysFunKsional Creed and a celebrity after party.  At the launch of the event last Wednesdays, organizers 3rd Eye Entertainment and Made in The City Entertainment procured Marsha Amborsius, the songstress half of now –defunct group Floetry to host, along with WPGC morning show host Big Tigger. Last Wednesdays event was part event launch, part celebration of Ambrosius and Q. Parker of 112’s upcoming album release.


During a pre-performance interview, Q. Parker from the Grammy-winning R&B group 112 is prepping to release his first solo album which will be called “The manual.”  He was slated to release a solo effort earlier a couple years ago and even released a single off of it, but the final album never came to light.
“Everything is about timing,” he said. “We have everything moving forward so it’s going to be a bigger deal.”
Q. shared that while he will be folding in some tracks from that album, for the most part it will be an entirely new effort and includes a bevy of industry producers and cameos.  Fans can expect the crooner to deliver tunes and tracks which will essentially be a manual for a man or woman to seduce a partner.


The independent effort is slated for release this fall or winter.
Q also shared that for the past few years, he has been consistently touring and doing appearances worldwide across Asia, Europe and North America.  He also revealed that a much anticipated reunion album with 112  is indeed in the works, but that the group is still dealing with a few dissension among members.


“Like everything, it will take some time, “ Q added.
Later, Q took the stage, wooing the heavily female audience and triggering some nostalgia as he performed songs that will be on his forthcoming album and classic 112 hits.  He was backed by the new house band Dysfunktionl Creed (or DC for short) that will perform nightly during the Industry happy hour for 90 minutes straight concert style.
Lead vocalist Prema, shared what is unique about the band which is not go-go.  “We are multicultural and we cover all genres of Music,” she said.


Members of DC have backed other acts including Aaliyah, Patti Labelle, Tank, Go-Go bands Pure Elegance, Northeast Groovers and The Lissen band.
A release about the  16-member group reveals band influences which include Marvin Gaye, Chuck Brown, Bob Marley, Frankie Beverly & Maze, Maxwell, Sade, Curtis Mayfield, Floetry and the Roots.  However, according to Prema, the sound is clearly The Roots meet  The Black Eyed Peas.  She said the band's sound can be defined as rock, blues and R&B fused with hip hop, jazz, reggae, pop and go-go, with a little Caribbean sounds thrown in between.
Patrons can expect to hear 10 to 11 songs each Wednesday during the weekly series, Prema said.
Email Post
Labels: Features