Skip to main content
Posted by Posh The Socialite March 10, 2011 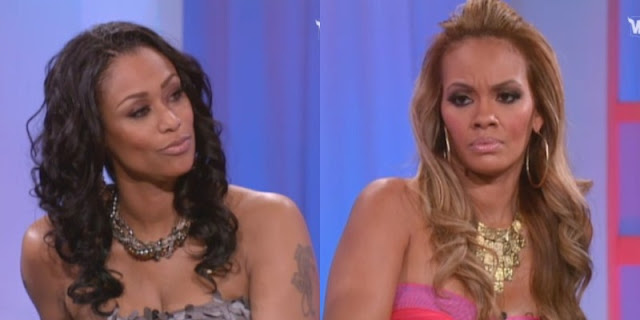 Here they go Tami and Evelyn. I totally don't agree with Evelyn dropping the news about sleeping with Kenny in  last week's episode of Basketball Wives. Although, Evelyn claimed that she was not aware that Kenny was married to Tami, the principal was that she should have told her way before they became close as they did before during the show.
The ladies of Basketball Wives are gearing up for what looks like a drama filled Reunion Show that will air in two parts this coming weekend.  Former NBA Player John Sally hosts the special which takes no time getting into the end of season fight between Tami Roman and Evelyn that occurred after Evelyn revealed that she had slept with Tami’s husband.
Cutting right to the chase, Evelyn claims that when she slept with Kenny Anderson, she knew he was engaged but didn’t know about Tami. “When that happened with Kenny…. this was before my ex-fiancé. He was engaged to someone else…we knew he had kids by someone else but we didn’t know about her…that he was still married.
Royce stepped in and said that is the very reason she doesn’t trust any of them, especially Evelyn because she just said that when she slept with Kenny she knew he was engaged to someone else and she still thought it was okay.
After snapping at Royce, Evelyn goes on to say that she thinks that Tami knew about her sleeping with Kenny the whole time but she just wanted to make her mark on the show.


Tami: Oh, please I could care less because this does not define me. I don’t move from one player to the next. What I do, is establish my own.
Evelyn: But you have messed around with other players boo. So Kenny was the only player you’ve messed around with?