Skip to main content
Labels
Posted by Posh The Socialite May 14, 2011

Bouncing Back With Baskeball Wives Season 3 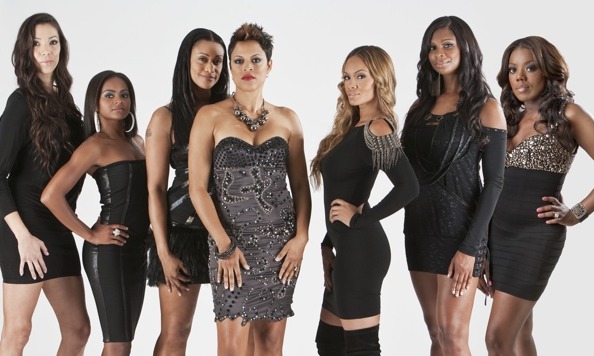 Season 3 of Basketball Wives is well underway. I'm excited about this season and I'm looking forward to the new drama. The Drama is already happening during taping, with Tammy again ready to throw blows with the new cast member Meeka Claxton I also noticed that Suzie is back. I wonder what brought her back to the show the money or the reality show "fame"? I'm guessing both because I sure didn't know who she was prior to the show and during the last season she was still trying to find herself career wise.

I am also looking forward to Evelyn's character on the show especially now that she is getting a higher salary and her established relationship with Chad Ochocinco.

Check out Baller Alert article on the upcoming show and tell me what you guys think. Are you excited like me or over it?

There backkkkkkk! Basketball Wives is premiering Monday, May 30th at 8pm on VH1.


Will Tammy and Evelyn be able to work it out after Evelyn told her she was a non-motherfuckin-factor? Will Royce step it up and give us some drama? What's going on with Jennifer & Eric? Suzie is back? And who is the new chic?

“Basketball Wives” season 3 begins with Shaunie O’Neal settling back into Miami determined to be drama free or leave the ladies alone. Shaunie balances a new shoe line, her love life, family outings and being a shoulder to lean on for the other ladies and is not sure if she can handle the pressure anymore. Evelyn makes the transition from a basketball wife to a football wife with fiancé Chad Ochocinco. The cameras will catch Jennifer leaving her “player” behind and navigating a new lifestyle as a single lady. With Royce’s new larger than life attitude, viewers will see if there is enough room for involvement with Jen, Evelyn and Shaunie or if her attitude will take the spotlight. Left hurt and betrayed, Tami works on rebuilding her trust for the ladies and moving on from the past. But before she is able to forget the past, Tami is faced with the determination to stop Evelyn, who is given the unusual opportunity to profit from last season’s blowout in unexpected ways.

As the ladies try and move on and settle their differences in season 3 of Basketball Wives, Miami will be taken for a spin as a new face is added to the familiar mix. Viewers will see the return of Suzie, who will attempt to reconcile with the ladies who sent her packing last season, but will her friendship with Royce lead to an ultimate disaster and her final exile by the ladies? As the gorgeous women return to Miami, the basketball wives are joined by a new face, Meeka Claxton, married to Golden State Warriors star, Speedy Claxton. Meeka Claxton is co-owner of the Allure Realty Group and knows what it takes to be a successful woman. With a hands-on approach to life and a never give up kind of attitude, Meeka will give her new fellow basketball wives a run for their money.