Skip to main content
Posted by Posh The Socialite May 20, 2011 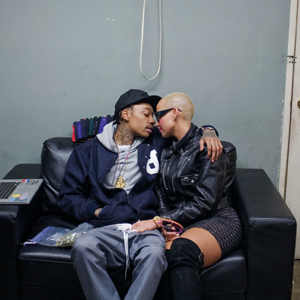 Wiz Khalifa was interviewed on Joined Choice with Kojo & Max. We all know that rumors were circulating around in media blogs about Wiz and Amber getting married secretly. In the interview Wiz Khalifa addresses his long term relationship with Amber. In Wiz's eyes Amber is wifey material check out what Wiz said in the interview when he is asked about his relationship with Amber Rose:

“She’s just so positive and she’s just understanding of my life and capable of dealing with a person like me and I’m not like a crazy person but I’m creative and I’m really busy and I do a lot," he said: "But she just has the capacity to deal with all of that and make me interested in her just as a person and not just her look or anything like that.”
When asked by the show's presenters if he intended to put a ring on Amber's finger, Wiz said: "Sure! she's definitely the last girl I'm going to be with."
Wiz also revealed that Amber is understanding when it comes to his female fans, he said: "I can say hi to them, I can shake their hand, take pictures and stuff. As long as it’s respectful because Amber is very mature as far as that goes. She knows I have fans and they love me and she respects my music and looks at me sort of that way too, because she respects that it’s like she knows what they’re looking at."
He also added: Just the same thing I know what guys are looking at when they see her.”