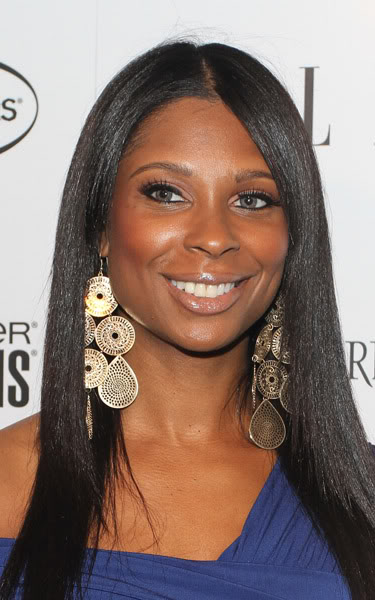 Okay, so if you love Basketball Wives then you would have caught the finale that aired this past Monday and it was quite an event with Jennifer and her soon to be ex-husband Eric Williams. Twitter was going crazy during the show when they showed Jenn having her divorce party. I thought it was hilarious especially when the cake had Eric and his knot on it. The kicker of the show was the end when Jennifer and Eric met up to talk about the hold up on  the divorce and then the splash fest happened. Yes, Jennifer threw the glass first and Eric threw the glass of water in her face. I know Jennifer did it first but boy that was totally crazy how he did it. Anyway, check out the interview of Jennifer Williams speaking to Hollywood Life about the incident and Jenn's friendship with Royce Reeves.

Basketball Wives star Jennifer Williams handled herself quite maturely when her soon-to-be ex-hubby Eric Williams threw a drink at her during the Aug. 8 season finale. Jennifer also decided to leave the scene before her co-star Royce Reed arrived so that she could avoid the drama of a pointless confrontation. HollywoodLife.com talks with Jennifer about everything that happened during the season finale — and Jennifer tells us that she’s “shocked” at how certain situations turned out!
Jennifer couldn’t believe it when Eric threw the drink in her face. “I was actually in shock,” she admits. “To be honest, I know that I threw the glass [first], but I didn’t throw it intentionally to hit him. I felt like when he came back, and he threw the drink, I was like, ‘Wow!’ It was so aggressive and so forceful. It was like, ‘Wow, did he really just do that?’ It was just a confirmation that I was doing the right thing — getting a divorce.”
So she was quite glad to let loose on the “Eric” pinata at her divorce party! “It definitely felt good,” Jennifer fesses. It felt good to be with my friends and celebrate independence. Although I’m not officially divorced, I know that I’m moving in that direction.”
And when it came to Royce, Jennifer believes that they will never be friends again. “I don’t really have anything to say to Royce,” she says. “I feel like she’s very immature and I already tried to explain to her one time. I don’t think she’s going to get it, so I’m done. I’m not going to make you anymore relevant. I’m done.”
See the full interview and video here: