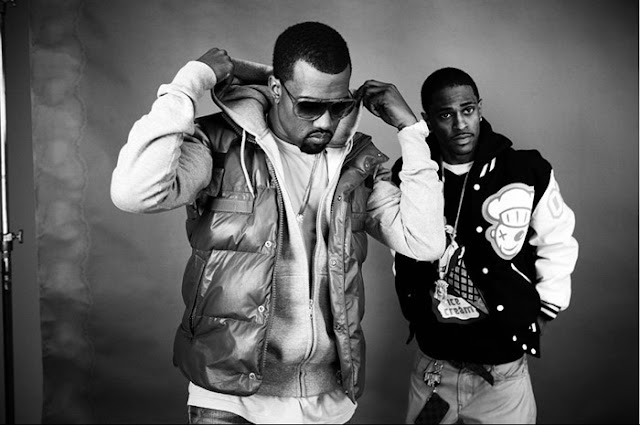 Rapper Big Sean brought plenty of G.O.O.D. Music with when his I Am Finally Famous Tour rolled into New York on Sunday (Oct. 9). Fellow labelmate CyHi the Prince and Inglewood, Calif., rap newcomer Shawn Chrystopher were among the special guests at the show — but Sean saved the best for last as he brought out his mentor, Kanye West, onstage for a surprise performance.
Rap blog RealTalkNY was able to capture Sean and Yeezy together performing their duet song ‘Marvin & Chardonnay.’ The clip features the Detroit native wearing an embroidered black robe looking like a small welterweight boxer as he was pumping his fist in the air to get the crowd hyped. Meanwhile, Kanye’s look was more subdued, rocking a plaid flannel shirt, a gray tee and leather pants.
Afterward, Big Sean spent a few moments to perform two new songs that he recorded for his second album, which is in its early stages of production. The first tune was the electric guitar-driven ‘All I Know’ followed by the strip-club anthem ‘Keep It G,’ which he premiered at his North Carolina show a few weeks back.
Check out the video: