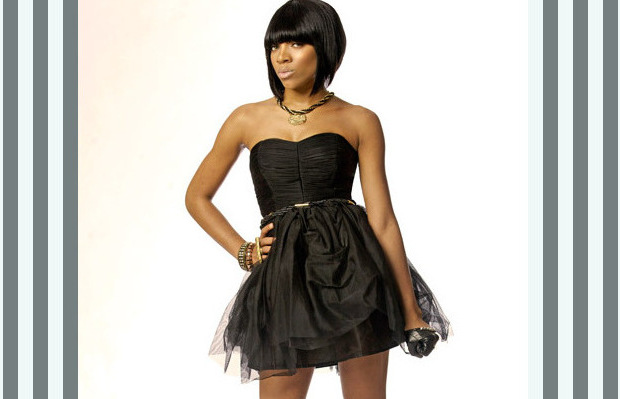 Lil Mama sat down the XXL to speak about the media frenzy that headline across many blogs and magazines regarding her alleged "beef" with Nicki Minaj and comparing it to The Notorious B.I.G and Tupac's beef. Read more about what Lil Mama had to say and tell me what you think.

Harlem-born, Brooklyn-raised Lil Mama came on the scene in the spring of 2007 with her hit single “Lip Gloss.” But after a seemingly quiet two years, the New York femcee made headlines once again when she crashed Jay-Z and Alicia Keys’ performance at the 2009 MTV Video Music Awards. Since then, she’s gotten a lot of flack from the critics, but the pint-sized rapper says she isn’t letting the hate stop her.
After a recent interview with New York radio station Power 105′s Breakfast Club crew, during which she addressed why Nicki Minaj is copying her and took a lot of heat about her alleged bad looks and lack of talent, Lil Mama chatted with XXL to clear the air. Keep it poppin’. —Amber McKynzie
You’ve been in the media a lot lately. What do you have going on?
Lil Mama: I just recently released a viral video called “Scrawberry.” Definitely an authentic hip-hop beat. It’s sampled from Special Ed’s “I Got It Made.” I’m about to release a few other joints that I have a few viral videos for. One is “Hustler Girl.” I’m getting a lot of great feedback about “Hustler Girl” because it’s an anthem for women like us – like me and you. We out here, we doing our thing, whether we’re doing magazines, whether we’re doing radio, whether we’re actually a hip-hop artist, or even if you’re just a doctor or lawyer. Whatever you do, you’re hustling, getting your money. The second one is “So Much Money.” [It’s] a dance track. We’ve been getting great response, so the next two records that I’m gonna release are real big.
You’re really getting back into your music. Does this mean you have an album on the way or you’re just putting tracks out?
[I’m] just resurfacing as an artist. I might be putting out a mixtape, and, you know, just getting back on the scene in that way that I want my fans to receive me. I’ve been getting feedback, whether it’s positive energy or negative energy. It’s all been helpful to me in the past few months, and my music is definitely gonna speak for itself. I’m just feeling so blessed.
A lot of people still see you as the “Lip Gloss” girl. How has it been transitioning from a teen sensation to an adult performer?
I think that my fans definitely have grown with me. Every artist has their struggle point. My challenge was to be lyrical and to show people that, Yeah you’re from the streets, you’re rough, but [you can] show people that you can do it without even doing that. Because my music has always been like that, it’s been easy for people to watch me grow. It’s not like I tried to like start cursing [or] try to act like I got this new, grown image. So, I feel like the response is sort of like being in our grandmother’s living room. Some people are gonna have something negative to say, some people are gonna have something positive to say, but they all got something to say because they all care and I love that.
With that said, are you they type that feels all press is good press?
I love the positive. Everybody loves the positive. If you hear something positive, you be like, “Oh, I’m doing my thing!” But, this industry … it’s like being in my grandmother’s living room…there’s like 50 of us…some people try to put you down and then some people will lift you up. It’s not like we hate each other, it’s just that you might have a negative energy when you tell somebody how you feel about them [laughs] because you’re just tired of their stuff, you know. But, growing up in New York… you take from everything. Even the drug addicts could tell you something, and for someone else they might be like, “Shut up, she don’t know what she’s talking about. She get high,” and then you might be like, “Naw, but did you hear what she just said? That helped me.” So, I take it all.