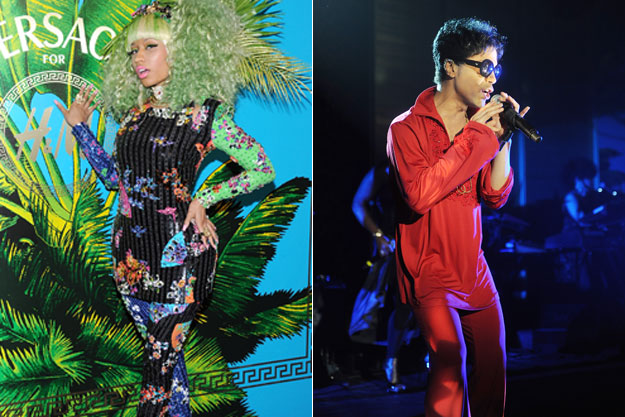 Nicki Minaj is so animated during her performance of  Roman's Rvenge and Prince a true legend has the party rockin' during the Versace For H&M Launch.

Before a lineup of celebrity guests that included Kesha, Jennifer Hudson, Uma Thurman and Jessica Alba, Nicki Minaj and Prince rocked the Versace for H&M fashion show at New York City’s Pier 57 on Tuesday night.
Billboard says the pair took turns performing during the high-profile event. Decked out entirely in red, Prince played some of his classics, like ‘Purple Rain’ and the funky ’1999′ album track ‘D.M.S.R.’ Minaj went with a colorful Versace outfit and bright green wig.
“It looks good,” Minaj told Fashionista about the collection. “All the stuff they brought to my room today I was like, ‘I’m keeping that!’”
Read More

Watch Prince Perform ‘D.M.S.R.’ at the Versace for H&M Show