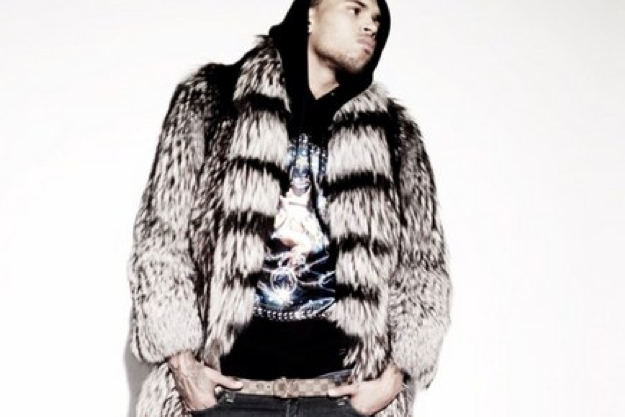 Chris Brown new promo photo recently leaked and he looks mighty fine I might add but, PETA may be angry because of his furry friend in his promo photo. Check out more about the leaked photo and how PETA may go  HAM on Breezy, yup pun intended!

Although Chris Brown plans for 2012 don’t include granting interviews to the media, he might have to explain himself about his latest promotional photo. In the pic, Brown is draped in a long fur coat with a black hoodie, blue jeans and white kicks. It’s the fur coat that might not sit well with the folks at PETA.
The leaked photo is part of the singer’s promotional run for his upcoming album ‘Fortune.’ We don’t know if the coat is actually real or if the fur is fake — either way, it’s certainly a fashion faux pas on Breezy’s part. Once the people at PETA take a look at this photo they will no doubt wrinkle their noses at it.
PETA is notorious for going after celebrities who choose to wear animal products like leather and fur. They even crowned Janet Jackson — of all people — as their ‘Grinch of the Year‘ for involving herself with the high-end fur brand Blackglama.
Breezy doesn’t need any bad publicity to slow down his comeback plans for 2012.