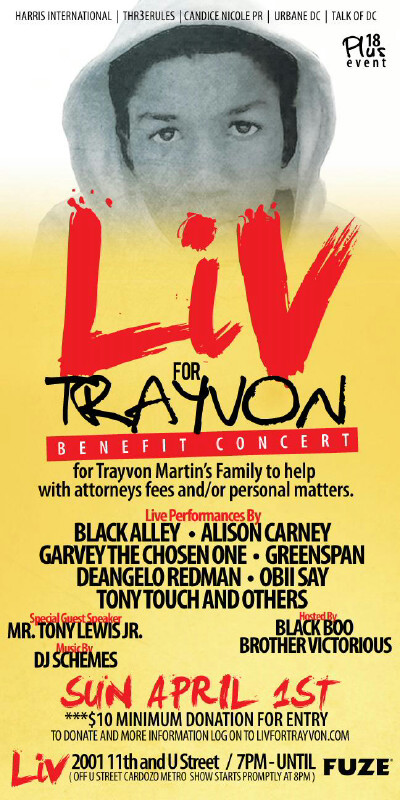 In Sanford, FL on February 26th, 17 year old Trayvon Martin was gunned down as he walked home unarmed. With so many unanswered questions surrounding this situation, the general public agrees that the wheels of justice should play out accordingly.  Unfortunately as of now there has not been so much as an arrest associated with this tragic situation. On Sunday, April 1st at 7pm in Washington, DC at Liv Nightclub (2001 11th & U), "LiV For Trayvon" Benefit Concert will take place. This benefit will serve as an artistic outlet that will create awareness and allow artists to express their sentiments through music and spoken word. It will also be a medium through which the public can show support and solidarity as it relates to their desire to see the legal process play itself out in a court of law.

For more information on this event or to donate, please visit www.livfortrayvon.com. To join in the conversation on Twitter, please use the hash tag #LiVForTrayvonDC.

*Please note, 100% of the proceeds raised at "LiV For Trayvon" Benefit Concert either through ticket sales or donations, will be sent to Trayvon's Mother, Sybrina Fulton via the Parks & Crump Law Firm.