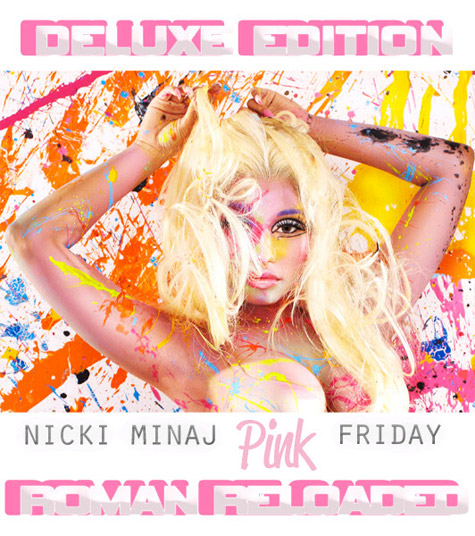 Check out Nicki Minaj Pink Friday: Roman Reloaded deluxe album cover pretty dope. The artwork shows Nicki covered in colorful splattered paint and a nice set of racks..lol. Anyway, the album is due to drop on April 3rd. Nicki recently spoke with Vibe magazine Senior Editor, Clover Hope and gave her the rundown on her upcoming album. Check it out below:

VIBE: Is there a greater percentage of rap than singing on Roman Reloaded?
Nicki Minaj: I’m not going to break my album down based on percentage of rap and singing. What it is, is amazing music. And what it is, is music that I created and I had a blast making and it’s going to be very free and exhilarating.
What direction is it going in?
It’s going in a very free, exhilarating direction in terms of me owning who I am and me enjoying the process of making music. I think that when you get the album you’ll feel as if I had absolutely no boundaries. That’s probably the best way to explain it so that you understand. The album just has no boundaries. The album cannot be boxed in.