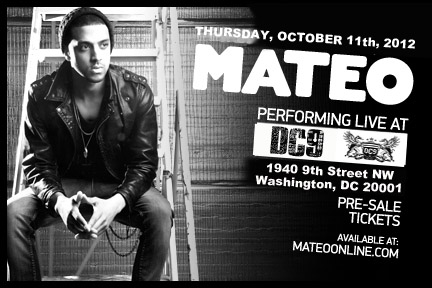 Signing this year with Interscope Records and having Grammy-award winning producer Kerry "Krucial" Brothers (Longtime producer for Alicia Keys) at the helm of his major debut, Mateo recently released sixth project titled, Suite 823. Already sharing the stage with artists such as J. Holiday, Day26, Mario, and Erykah Badu and releasing his acclaimed Underneath The Sky Mixtape series, Mateo has proven he has the “it” factor.

Making a fan base in early 2009 with Myspace Records, Mateo is now preparing for the release of his debut full album on Interscope Records in early 2013.