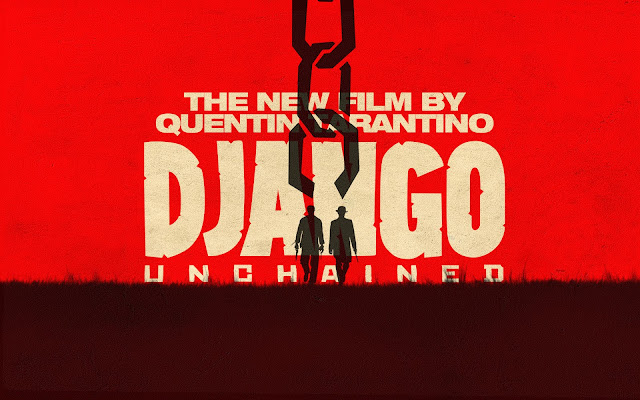 The movie, set in the 19th Century, begins as the title character Django (Foxx), is being carried off to a new slave owner along with other fellow slaves. He is ultimately purchased by  German bounty hunter Dr. King Schultz (Waltz). Schultz first freed Django from bondage so he could assist him in one particular bounty hunt, that of Djangos immediately previous overseers.  However, after successfully scoring that bounty, the two end up partnering up for the winter until Django can find and rescue his wife who had been sold to another master.

Django Unchained is mainly a Western - set in the dead of winter, no less, something you don't see often in modern or historic spaghetti Westerns usually set in summer. Alas, but it is also part antebellum period film and part love story.  The film includes plenty of the explosive and very vivid, bloody, gun-killing scenes that one can expect from a Tarantino film.  Tarantino, who makes a cameo appearance himself in the film, brings back his fantastical story telling wizardry in this movie that is executive produced by the Weinsten brothers. They, co-founders of Mirimax films, are the same duo who green-lit and brought us Tarantino's first blockbuster hit Pulp Fiction  back in 1994.  The film came about back in 2007 when Tarantino decided he wanted to direct a spaghetti western.

Fast forward 5 years when it finally comes alive in this movie.

In this film, set for national release on December 25, you have very eclectic and fantastical over-the-top characters in Schultz,  a dentist turned bounty hunter, who travels about the country using his expansive vocabulary and speaking prim and proper to the gang of quasi-educated slave masters and miners he encounters in his new life in America. As a bounty hunter, Schultz is vicious and calculated in killing off his "Wanted -Dead or Alive" hits for which he collects hefty bounty for, yet he is repulsed by the notion of slavery. He exhibits compassion for Django and the black slaves in the movie. The inner turmoil of watching what some endure eats him up to the bitter end. His character is empathetic and heroic. 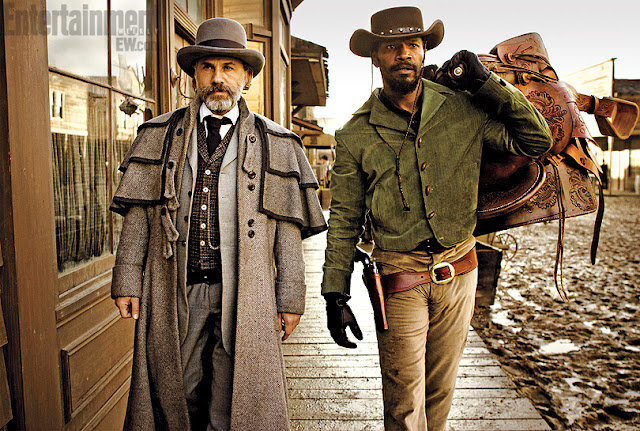 And so Schultz helps his partner Django as the two set off to recapture Django's bride, Broomhilda, the German speaking slave girl who has matching whip marks and face branding as her husband Django from their slave escape attempt days. They must be creative in their attempts to buy her back  from her master, Calvin Candie (Leonardo diCaprio). DiCaprio plays wonderfully a third generation Mississippi plantation owner who has turned from harvesting cotton crops to making his money managing a brothel and arranging Mandingo fighting competitions. Unless you have extensively studied slave history, you may have skipped over the very brutal and vicious sport that some slave masters enjoyed of having their strongest slaves wrestle one another to the death for their viewing pleasure. It is macabre and disturbing to see it played out for the first time in this movie. 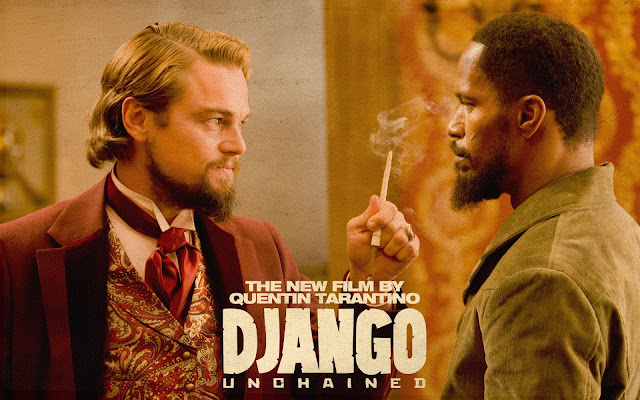 Yet  it, and other aspects of the movie's setting,  are harrowing accounts of the horrific lives slaves endured and the different capacities not always taught in history books.  Tarantino doesn't sugar coat the pure brutality of the times and life for slaves. This is no Gone with the Wind.

DiCaprio did a very convincing and fantastic job. I enjoyed his performance thoroughly. I never got a chance to really like his charismatic character or enjoy his occasional retorts as I was reminded throughout the film that he is not a nice person at all and is one of the most heinous types of slave masters. He is a spoiled brat with a twisted sense of uber entitlement and is disconnected from the evilness of his ways.

His character's head house man, Stephen, played by Samuel Jackson, was the type you could never ever like. He was loyal to his master and particularly hateful to his fellow slaves in the big house and field. Jackson played an excellent villain. He commanded the screen and also gave a standout performance.

Washington barely had any lines but did a decent job as the damsel in distress with her role in this film limited to that of a maiden who was to be rescued. She delivered her dramatic parts well and convincingly enough. She was a far cry from her super strong heroine figure in the ABC drama she currently stars Scandal.

Finally, Django was a likable character even though he played a cold-blooded bounty hunter. Interestingly enough, he was a slave who was more cultured, bred and well spoken when he first met Schultz though it's not well explained in the movie how he got to be so. For example, Django could read somewhat and quickly picked up etiquette well enough to pull off some of the rouses he and Schultz put on during their adventures. Django was brave and clearly not the typical slave but you were shown this fact in the  way people stopped and watched him as he rode through towns as a free black man on top a horse - something never seen in that time.  Foxx stands out enough even though his title character he never truly commands the lead character position.

He comes off more as a passive participant in a series of events masterminded and puppeteered by his teacher Schultz. His hands are always one step away from his gun, revealing to audiences that he could easily become unhinged, but he rarely does go off in the film and neither "breaks character" though he comes close. Of course, you do see him evolve into a master sharp shooter and master planner of his own but for me, it came too late. I would rather had seen him command the reigns earlier in the film.

Overall, the film is a wild ride but is signature Tarantino revenge flick.

Though, Tarantino manages to incorporate quite a few humorous scenes that had my audience cracking up out loud. You'd forget for a moment the gruesome scene moments before getting lost in the plentiful comic relief sprinkled in the film. Jonah Hill, as a bumbling Klansman, is hilarious.

The collective individual performances in the movie, in particularly that of Waltz and DiCaprio could result in several Academy and Golden Globe awards. In true Tarantino style, he brings in 21st century audiences by intermixing the film's soundtrack with instrumental music and modern pop and rap music. Franco Nero, who originally played the character in 1966, makes a cameo appearance. And Miami Vice's Don Johnson even plays a lead role  as plantation owner Spencer "Big Daddy" Bennett.

Movie goers will want to root for Django and Broomhilda's love and will melt when following the journey to reconnect these unrequited love birds.  There isn't enough time dedicated to the couple's passion for me. I needed more. Perhaps it got edited out for time, but there was very little and what was shown was rushed. Call me a hopeless romantic.

Django Unchained's unexpected elements make  what I thought was just yet another antebellum movie quite palatable and enjoyable - I mean once I could remove my fingers from shielding my place from the frequent gun battle scenes long enough. And yes, on more than one occasion  during the entire 2 and half hours the film ran, my mind drifted to the Newton, Connecticut massacre and it took a lot for me to shake it off.

But If you loved what Tarantino did with the Holocaust in Inglorious Basterds, you will thoroughly enjoy his take on Slavery in Django Unchained.

Go see it when it is released to the general public on Christmas day!

Check out the trailer: