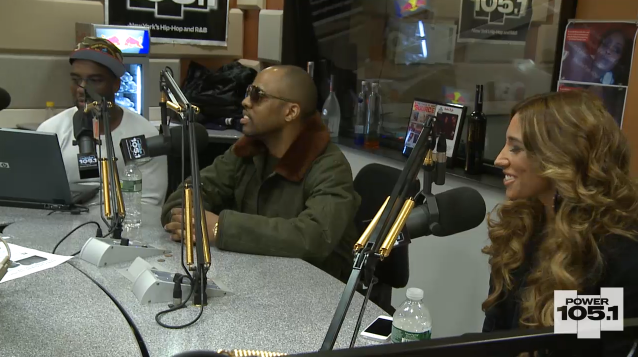 VH1 Love & Hip Hop couple Consequence & Jen The Pen sat down with our favorite New York morning show The Breakfast club to talk about their view on the popular reality show he's the only person representing New York on the latest season of "Love & Hip Hop." Slamming the entire cast Monday, the Hip Hop artist and writer claims everyone else is from New Jersey and they can't compete with his story.

"I am "Love & Hip Hop" New York. The rest of them from Jersey," Consequence shared with Power 105.1 Monday. "When you see us on TV, this is what we deal with. You're just getting a piece of the intimacy. It goes much further."

While Consequence claims to be the only New York resident on the show, he's not worried about being low on the list when it comes to some viewers not paying as much attention to his story, as much as others, like Joe Budden and Tahiry.

Consequence talks "Love & Hip Hop"
"Whether it get idolized or it don't, I got the realest story on there. Ain't nobody else do what I did. Ain't nobody smacked me nowhere," he says in video below, slamming the cast in a way. "Most of them ain't touch no Grammy or nothing. This is they foot in the door and congratulations. But understand, when you see me, you see twenty years of excellence.".

Well damn check out our next post on Love & Hip Hop Season 3 Episode 3 and tell us what you think about Consequence going in on the other cast mates of Love & Hip Hop.