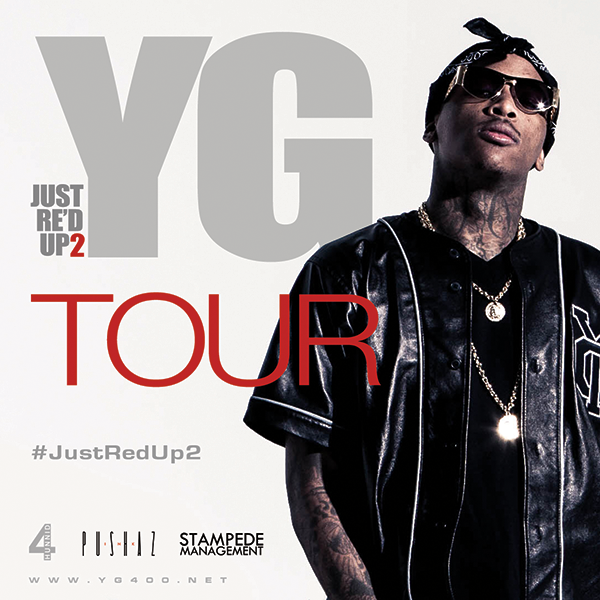 Def Jam recording artist YG announces dates for his Just Re’d Up 2 Tour, which kicks off March 6, 2013 at PVD Social Club in Providence, Rhode Island. The tour will hit several cities across the U.S., including Brooklyn, New York at the Knitting Factory, Oakland, California at New Caribbean City, and Seattle, Washington at Neumos.

YG will be joined on tour by Grammy-nominated producer DJ Mustard (“I’m Different” & “Rack City”). He will also showcase his talents at this year’s SXSW Music Festival, which takes place March 12-17 in Austin, TX.

Just Re'd Up 2 features stand-out tracks, such as “Make It Clap,” “You Broke” ft. Nipsey Hussle, and “Playin” ft. Wiz Khalifa and Young Jeezy and is the sequel to YG's critically acclaimed 2011 mixtape Just Re'd Up, which featured several smash hits, including “Up” ft. Loverance and Iamsu and “Bitches Ain’t Shit” featuring Tyga and Nipsey Hussle.

Since their first collaboration in 2010, YG and DJ Mustard have created party anthems, which have greatly influenced popular music today and developed a new sound, which has given birth to an emerging Los Angeles subculture. The duo is excited to share this new brand of West Coast rap with fans across the country.