Skip to main content
Labels
Posted by Posh The Socialite May 04, 2013 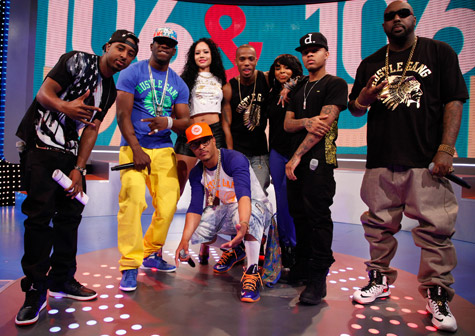 G.D.O.D is almost here and I'm definitely going to cop the mixtape when it drops May 7, 2013 and while surfing the net I found this post on rap-up.com  Hustle Gang stopped pass 106 & Park check out the post below. -Posh

Hustle Gang was in the building on Friday’s episode of “106 & Park.” T.I., B.o.B, Young Dro, Trae Tha Truth, and Kris Stephens took over the set to promote the Hustle Gang mixtape G.D.O.D., which arrives May 7.

Grand Hustle chief’s Tip held court on the couch to discuss touring with Lil Wayne on the “America’s Most Wanted Music Festival,” which kicks off July 9 in Birmingham, AL. He also announced that 2 Chainz has officially joined the lineup.

After chatting about the “Memories Back Then” video and working with Kendrick Lamar, he was joined by B.o.B. and the rest of the gang (minus Iggy Azalea, Travi$ Scott, and Chip).

“The mixtape is just a prelude to what you will see in the near future. We gon’ turn up in grand fashion in all suckers’ faces and we ain’t gon’ let up, period,” said Tip, while B.o.B added, “It’s an amazing project because you got all these artists bringing our best material together on one project—it’s phenomenal.”