Skip to main content
Labels
Posted by Posh The Socialite May 23, 2013

WATCH: On The Road To The Billboard With Nicki Minaj Video 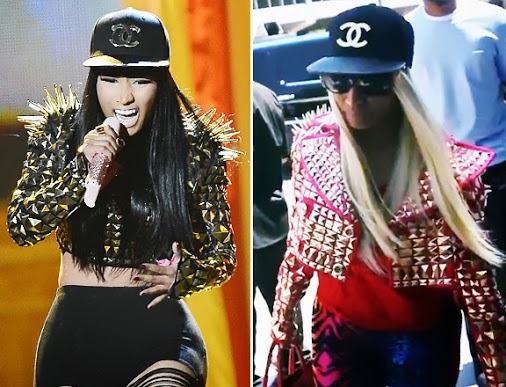 "Check out MTV Style review and  Road To Billboard documentary filming the behind the scenes up to Nicki Minaj performance for the 2013 Billboards Awards & Performance that occurred this past Sunday. Gotta love Nicki spiked jacked and overall style and performance. Read the full article below and video and tell us what you think".-Posh

Nicki Minaj sartorially slayed it at the Billboard Music Awards this weekend while performing "High School" onstage with Lil Wayne. She sported a decked-out gold and black studded motorcycle jacket with badass giant shoulder spikes, ripped leggings, high-heel booties, a gold Chanel logo snapback, and crop top. We fuh-reaked out over this look because it's SO throwback Nicki with the straight jet black hair, pale pink lipstick and skin-tight leggings. Little did we know, though, Barbs actually had a WHOLE OTHER version of this killer look that she wore earlier that day (!!!), which we peeped in a video she released this morning.

Nicki's behind-the-scenes "The Road to Billboard" vid features rehearsal footage leading up to her big performance. She spends most of her time hanging with choreographer Laurieann Gibson (in a military hat from her own Kmart collection, nonetheless), and on the day of the show, we see her sporting the SAME jacket from her performance, but in red.

Interestingly enough, she also styled it in the exact same way. She wore another Chanel logo snapback (this time in white and black) and leggings (this time with technicolor animal print) with straight strands (this time in blonde). We're kind of amazed at how she sported a duplicate outfit (in a different colorway) twice in one day, and, um, this also verifies the fact that we need to know who made this jacket ASAP. It comes in black and red? Consider us officially intrigued. But tell us, which of Nicki's outfits do you like best? Let us know in the comments below!-Via MTVStyle


NICKI MINAJ - THE ROAD TO BILLBOARD from GRIZZ LEE on Vimeo.