Okay guys, so a source emailed me this photo of Love and Hip Hop's Karlie Redd in Trinidad posing in a white costume she wore during the Carnival celebration in Trinidad & Tobago, West Indies earlier this year.

If you are from the Caribbean or from Trinidad then you may know that most celebrities party with the hottest bands such as  Tribe, Fantasy, Harts, Bliss or Island People  and rock the hottest costumes like the one our favorite rapper Nicki Minaj  wore in her video for her  "Pound The Alarm" video which was filmed in Nicki's native Trinidad.

Karlie Redd also a native from Trinidad got a diss recently over the fact she did not jump with one of the hottest bands that everyone is usually clamoring to get into.

Karlie  took this photo with in her sexy white costume for a not so popular band, called Genesis. Don't believe me, then check out the comments from local Trinidadians going all the way in on Karlie Redd for her selecting a not so popular band to play mas in...one commentator even stated that perhaps "one of Karlie leaking breast came from her costume", wow!

"My thought Karlie Redd was not on Love and Hip Hop Atlanta at the time of Trinidad Carnival that usually take place in February, so what's the big deal. I think that the photo surfaced and now people want to go in...hmph still love Karlie Redd though...tell me your thoughts."-Posh 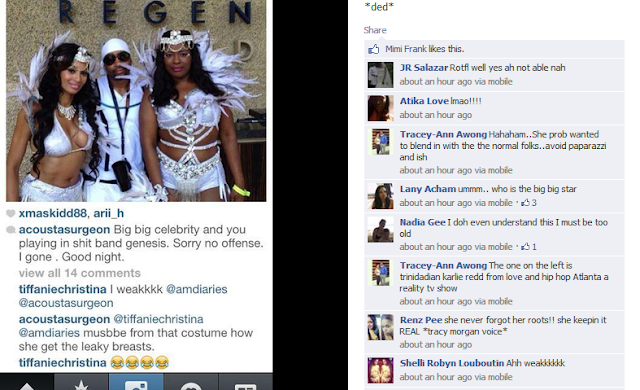