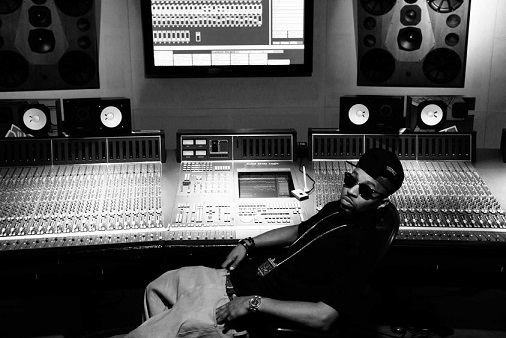 The past few years marked some of Drumma Boy’s most significant accomplishments to date. His production work with Young Jeezy and Kanye West was nominated at the 2009 and 2011 Grammy Awards, he was hailed #2 Producer of the Year in Billboard Magazine, nominated for "Producer of the Year" at the 2010 BET Hip Hop Awards and 2008 Ozone Awards, received a "Best Collaboration" at the 2011 BET Awards and "Best Club Banger" at 2011 BET Hip Hop Awards for Waka Flocka's "No Hands" while taking home the accolade for “Producer of the Year” consecutively at the 2009, 2010 and 2011 Southern Entertainment Awards as well as collecting over 10 ASCAP Rhythm & Soul Awards.
This year Drumma Boy's production will be heard on albums from Chris Brown (X), Wiz Khalifa (Blacc Hollywood), Lil' Wayne (Dedication 5), R. Kelly (Black Panties) Gucci Mane (Mr. Guwop) and the highly anticipated project from 2Chainz (B.O.A.T.S. II: Me Time) set to be released on September 10th. On 2Chainz new album Drumma says:
"This B.O.A.T.S II is definitely gonna be the album of the year! The sounds are so fresh and full of energy - perfect for waking up to, riding on the road to, and of course partying to. Me and 2Chainz were in the studio and when he heard the beat I made he just zoned out into a quiet mumble - he just started coming up with the lyrics straight off the top of the head and after about 10 minutes or so he was in the booth and we had "U Da Realist." On my track he's rapping about one of his loved lost homies, and the rest of the album also goes further into his personal life and shows us a different chapter. Definitely gonna be another classic"
After collaborating with Lil Wayne a few times in the past including on Birdman's platinum selling record "Money to Blow" f/ Drake, Drumma Boy recently linked back up with the Cash Money CEO, providing the beat for "Still Got That Rock" off Wayne's recently released mixtape Dedication 5. Of the manifestation, Drumma says:
"I bumped into Lil' Wayne recently at the Memphis Grizzlies' game during the playoffs where he and I both sat on the floor but both rooted for different teams lol. My team won but when he was walking out I told him "I still got that crack!" because every time I bump into him I say that, "I got that crack for you" - so he told me to send it. I did and the result became the joint "Still Got That Rock."
Drumma Boy is no stranger to TV having made appearances on shows like R&B Divas, Real Housewives of Atlanta and Monica Still Standing, this month he will appear on the Second Season of Nick Cannon's highly rated sketch comedy show "Wild N'' Out" airing September 17th on MTV2. He will take the stage alongside rapper Machine Gun Kelly performing the song "Lace Up" which he produced for the Bad Boy/Interscope recording artist.
Drumma Boy merges his unique musical influences ranging from German composers Ludwig van Beethoven and Johann Sebastian Bach to Jazz icons Dizzy Gillespie and Miles Davis all the way to Academy Award winning Three 6 Mafia and Scarface, combining classical chords with urban street sounds to create an ingenuity worthy enough for The New York Times to name him one of the four hottest producers “driving the city” in Atlanta, describing his sound as “a busy bee swarm of synths overlaid with brash bass injections that’s equal parts Memphis and Atlanta." His unique lineage and upbringing engendered a well received self-penned blog for The Huffington Post entitled "From Classical to Hip-Hop: Why Beethoven Still Inspires Me."
In 2010, Drumma Boy provided Waka Flocka with the monstrous thumping beat that would engender the chart topping single “No Hands” featuring Roscoe Dash and Wale with the latter even going so far as to shout out the Memphis native, “Drumma on the beat let me take my time.” Drumma’s reputation for transforming and sequencing sounds into the musical archives of classic hip hop tunes has made him an alchemist of sorts. “No Hands” reached #1 on the Billboard Rap Songs Chart and #2 on the Hot R&B/Hip Hop Charts, while peaking at #13 on Billboard Hot 100 Charts and receiving 50+ million Youtube views to date. Receiving song shout outs has become commonplace for the self described “Conductor.” In 2009 Canadian newcomer Drake opted to use the producer’s status as inspiration to urge women to dance, “Get to shakin' something cuz that’s what Drumma produced it for.” The track was “Money to Blow” off Birdman’s fourth studio album Pricele$$ also featuring Lil Wayne which blazed the internet, landing at #2 on the Billboard Rap Songs and Hot R&B/Hip Hop Songs chart, becoming the Cash Money Co-Founders most successful track as a lead artist to date.
Recently Drumma Boy’s repertoire has diversified even more with hands in everything from Reggae to R&B. His musical dexterity has given rise to distinctive music for Chris Brown f/ 2Chainz & Snoop Dogg ("Oh Yeah") Damian & Stephen Marley (“On de Grind”), Marsha Ambrosius ("I Wanna"), Wiz Khalifa f/ 2Chainz (“It's Nothin” & "Bluffin"), T.I. f/ 2Chainz (“Spend It”), Plies (“Lose My Mind”), Kandi Burruss (“Fly Above”) Usher Raymond (“Stranger”), Gucci Mane f/ Birdman (“Mouth Full of Gold”), Tinie Tempah ("Till I'm Gone Remix"), K. Michelle ("Self-Made"), Young Jeezy f/ Eminem and Freddie Gibbs (“Talk to Me”), Goapele (“Right Here”), DJ Drama f/ Jeezy (“4 What”) and Tech N9ne f/ B.O.B & Wiz Khalifa ("See Me")