TV One Launches "Are You That Girl?" Mall Takeover Tour to Find the Ultimate "Imunique" 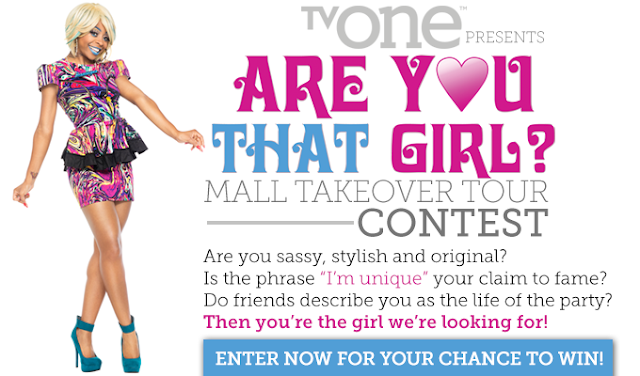 TV One, which entertains, informs and inspires Black adult viewers, today, announced the "Are You That Girl?" Mall Takeover Tour, a contest to commemorate the re-launch of the networks original comedy Love That Girl. Seeking to find the ultimate "Imunique,"- a sassy, stylish, fun-loving female who knows how to express herself, the network is partnering with its parent company, Radio One for the campaign. Interested contestants will upload a photo of themselves to a designated Radio One website describing in 50 words or less, why they are "That Girl." Radio One affiliates will also promote the contest in eight designated markets.

"Through this campaign and partnership with Radio One, our viewers will be able to interact with the

show across multiple platforms and become immersed in the world ofLove That Girl," remarked Linda Finney, Senior Vice President of Marketing for TV One. "This campaign highlights TV One's commitment to offering entertaining and diverse portrayals of the real black experience to our viewers and in keeping with our brand promise providing a destination where black life unfolds."

The top 30 entries chosen through user generated voting will be invited to compete in a runway show at a local mall in one of eight participating cities on October 12 and October 13. At each event, they will be judged on their personality, style, uniqueness and knowledge of the series. The winner of the runway show in each city will receive a $2500 gift card for a shopping spree, courtesy of TV One. Participating cities include: Atlanta, GA, Baltimore, MD; Washington D.C.; Dallas, TX; Detroit, MI; Houston, TX; Philadelphia, PA and Raleigh, NC.

episodes will air back-to-back at 9:00 and 9:30 PM ET and on Friday, October 25 the series will fall into its regular time slot, with one new episode airing every Friday at 9:00 PM ET.

Created by Bentley Kyle Evans ("Martin," "The Jamie Foxx Show"), Love That Girl follows the life and times of Imunique Jefferson (played by Bresha Webb), a dynamic and quintessential ghetto-fabulous chick who wreaks either havoc or harmony - depending on her mood. Along for the ride is an unusual cast of characters who equally withstand her whirlwind of antics but can't help but LOVE THAT GIRL. The cast includes Phil Morris, Bresha Webb, Alphonso McAuley, Peter Oldring, Mark Adair-Rios, and newcomers Reagan Gomez and Huggy Lowdown.
For more information about the series, visit: http://www.tvone.tv/shows/love_that_girl.html .

TO ENTER THE CONTEST IN YOUR LOCAL CITY, VISIT THESE SITES: