Drake to 2013 DC Concert Goers: "Thanks for one of the best nightsofmy...life" (REVIEW & VIDEOS) 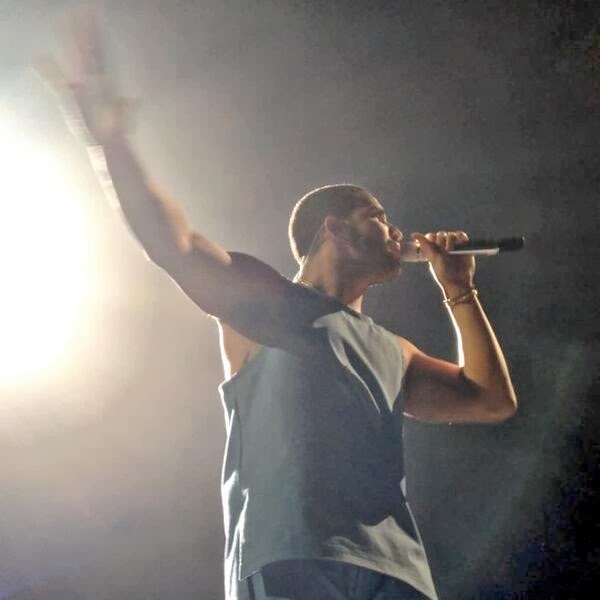 At the end of his 4-hour concert last night, Drake stood overwhelmed by the love, and paused to take in the splendor of close to 20,000 screaming and admiring fans at Washington DC's Verizon Center.

"I want to thank you for one of the best nights of my mother f____ life," the mutli-platinum artist told the audience on Halloween night. "This is the type of shit that you grow old and never forget about."

It was probably a much needed ego-boosting injection for a tour that, recently, has been marred by rumors regarding line-up changes and a recent cancellation over a major technical glitch. 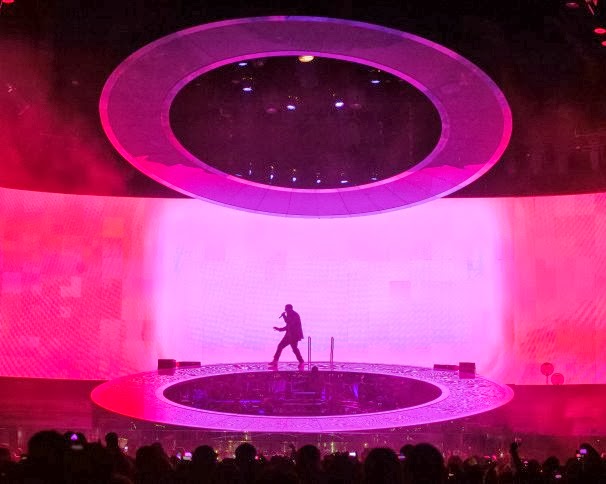 This DC concert was the 10th stop in Drizzy's 39-city "Would You Like a Tour" tour to promote his already certified platinum "Nothing Was the Same" album.  And despite the fact that this third studio release opened at #1 on the US Billboard Top 200 Album charts, he hadn't been selling out arenas so far.

In fact, before the Grammy-winning recording artist took the stage last night, WPGC dj Sunni  tweeted, "Yea this Drake concert is def not sold out. LOTS of empty seats! #DC" 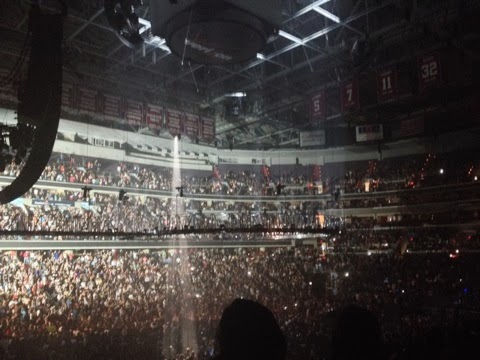 That might have been true at 9:04 pm when she relayed the message, but by the looks of the packed arena from my vantage point in a suite level box about an hour later, that grim report didn't really matter!

The show featured hip hop artist Future, who just recently got engaged to R&B songstress Ciara, and R&B Crooner Miguel as openers. Each sang their hits and had the people in the crowd up on their feet, singing and dancing along. Miguel channeled one of his idols, Prince, and did some spin moves and splits all while donning his signature faux hawk with a superman peak on the forehead  He was amazing though his soap box stage he performed on was underwhelming and seemed too cramped to contain the magnanimous ness of his hit songs.

After Miguel's set, Atlanta-based Future returned later after he  had already opened the show to join Drake in singing "Same Damn Time."  It was a bit awkward, but it went well. Still, you could sense a little bit of tension from before the tour started when Drake briefly dropped Future from the show altogether after the auto-tune aficionado said Drake's album was full of hits but "nothing grabbed you."

I personally had "The Motion"  (a bonus track on the Best Buy version of the album) on repeat for a couple weeks straight after it came out. I croon to the single "Hold on, We're Going Home" on my way home every day. That's my 5 o'clock anthem!

On set production, I marveled at the sleek design of the sloping stage.  The show was all performance -- just the man and his fans, unabridged. A DJ, keyboardist and guitarist were all the backup he needed. There were no back up dancers or extras, just videos of scenes to capture the emotion of the song on the various fiberglass elements that made up the staging.

In sum, there were at least three takeaways from last night's phenomenal show: 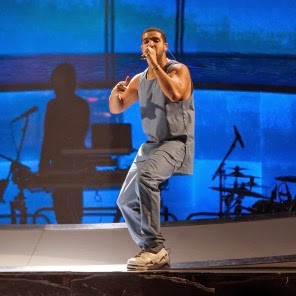 One: This card was definitely for the ladies. Rappers who sing their lyrics and have romantic dreamy album covers and whose discography include over 50% rap love songs understandably will also have a large female base. Walking from the ticket turnstile to my seat, I was actually amazed to see so many young women there, mainly dressed in black, in chic classy gear. A few people dressed in costumes. Some carried signs. There were a few couples but even fewer groups of men.  It was LL Cool Drake as in "Ladies Love."  And I guess the artist known as Miguel who has a bank of sexy hits also drew some women in.

Two: Drake loves DC. During the show, he mentioned how the DC market was among the very first to really "feel" his music and show him love.  Shows early in his career, he said , were always well attended and he always felt home here. Awww. I want to hope that he doesn't tell fans in every city that they are his favorite, but something about the delivery seemed genuine.

But then again, it is still early in the 39 city tour. There's plenty of chances for many other cities to out-do-us, although by night's end he asked us out on another date. (If he's serious, he may swing by for an added date later). We got you for a good ego-stroking, babes! Come on down!

Three: Drake's above audience riser salute is the best! He had to cancel his October 19th Philly show because the steel and metal circular catwalk stage he uses in the show segment had malfunctioned.  Some said he should have continued the show even without it, but last night I understood why he'd want to keep it. It's one of the best part of the show that is otherwise devoid of any circus acts you'd see to distract you in other shows. The OVO (Drake's Label) owl mascot at intermission was cool and all but the catwalk stage is needed to change up the show a bit towards the end.  Essentially, the stage lets him walk up to, in a circle, get up-close-and-personal with, and practically greet each audience member at every seat level - even those in nose-bleeder level 4 seats.

As he encircled it above their heads, Drake peered down and pointed out audiences members, speaking directly to individual ones.


I see you in the purple jacket, he'd tell a woman in the third row in the left side of the building.  "I see you with cat suit on, looking good," he told another. And so on and so one for about 20 minutes straight. Fans jumped to their feet hoping he'd call them out.

I liken it to the "kiss cam" you'd see at sports game when a camera focuses randomly on people sitting in between innings or quarters or during time outs or TV broadcast breaks. It's a joy to be recognized and spotlighted. I would say it ran a bit long towards the end  as its initial novelty wore off.  Also, during the exercise, he went slow and with precision describing people he "saw" in distinct detail. He started with the right side of the hall, the left and finally the center.  In the end, instead of declaring a winner, and which side of the arena was most hype, he decided we were all such a hyped up audience that we all tied! Boo! The Left side, which I was on, was clearly the best! 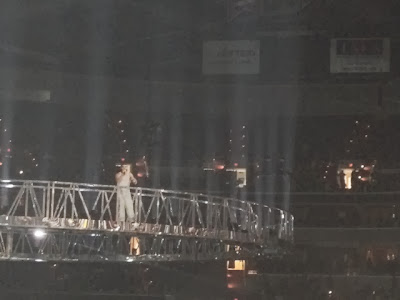 The catwalk bit helped make the night. It also relayed the message that he wanted to let as many people as possible who spent their hard earned money to come see him perform know he would reach out to them, literally, and acknowledge their presence.

It was interactive and future concert goers on the remainder of the tour should make it a point to wear something to stand out and be seen just for this segment.

It all made for a  very memorable concert experience that many who went will be talking about for a long time to come!

Drake Loves DC as he has mentioned it and its historic Howard University in several songs and DC loves Drake back!

See the remaining US tour dates Here! He recently announced a 7-city UK tour tacked on the end in March 2014. Tickets went on sale today.

Here are some videos from the evening: