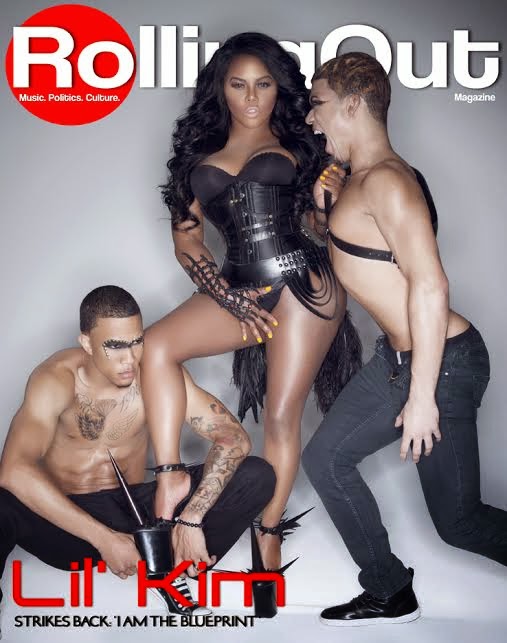 Lil Kim covered Rolling Out Magazine in the article Kimmy Blanco talks about industry beefs, betrayals and music. Check out the interview below and tell us what you think. We love Kim and respect her game and all female rappers in the industry. We're happy that Kim is speaking out and we wish the best for her and her music career-Posh

Who she is has never been in question. She’s learned life’s lessons in the public eye, oftentimes with her missteps becoming fodder for critique and ridicule. “I’m pretty sure everybody in the industry — and in life, period — has things that they feel like they would do over, but I don’t really regret much in my life,” she claims. “There are certain things that I would do over — and certain things that I would do differently. [But] the things that I go through and the things that I’ve gone through have become a major part of who I am today. “
She’s had to feel the sting of severed relationships and personal betrayals often in her life. Kim infamously cut ties with her former Junior M.A.F.I.A. brethren after members Lil’ Cease and Banger testified against her during her 2005 perjury trial. She and Bad Boy impresario Sean “Diddy” Combs have had a hot-and-cold relationship throughout their intertwined careers and her relationship with Biggie’s mother, Voletta Wallace, has been especially strained over the last several years. Last fall, she announced her breakup with her boyfriend, Mr. Papers, via Twitter before later tweeting that they’d reconciled; and she hasn’t given up on marriage and love (“If it happens, it happens, I’m not going to fight it. At the end of the day, I feel like I can have both.”) She’s gotten rid of her old management team (“At this point I don’t really have main management.“), and though she has opened Salon Se Swa, a series of boutiques with her cousin, Katrise Jones, that venture has also soured (“At this point we’re not really getting along, business-wise.”)
If nothing else, Kimberly Jones remains defiant and unbowed. Much of her resilience is tied to her having learned to separate business from feelings. “I mean … business is business and personal is personal,” Kim says. “I think that’s always been clear, but you learn more why it’s clear as you live it.” - Read More over at www.RollingOut.com