Woodbridge, VA rap artist PHZ-Sicks (pronounced ‘physics’) presents The Moment, his new album featuring Detroit rapper/singer Scolla, singer Alison Carney, DMV rapper Lyriciss and fellow Triple S crew member Seanny Greggs as well as production from Stompboxx Music, Best Kept Secret, Epik the Dawn, Kriss Liss and Kajmir Royale. The album's release comes on the heels of the John Ledbetter-directed music video for "Coming Down" (click to watch) as well as the single releases of "The Love Scene III" (click to listen) and "Black Women" (click to listen). PHZ was a 2011 DMV Best VA Male Rap Artist nominee and has opened for Wale, J. Cole and more. "This project was two years in the making, starting from the writing process, beat selection, constant musical changes and hours inside the studio to get where we are today," says PHZ-Sicks. 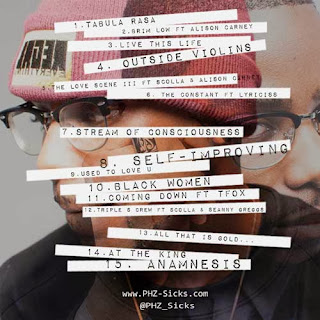 "The album is called The Moment because I feel with everything I put into it, this is the moment where my life changes. Where I get to pursue this passion like there is no tomorrow and finally reaping the rewards of the sacrifices I made to get to this point. The Moment is the embodiment of me and it's all I can give to the world." Click here to watch a video documenting the making of The Moment, and visit PHZ-Sick's Bandcamp page to purchase a personally signed and messaged CD copy.