Sneak Peek: Nicki Minaj In 'The Other Woman Trailer' (VIDEO) 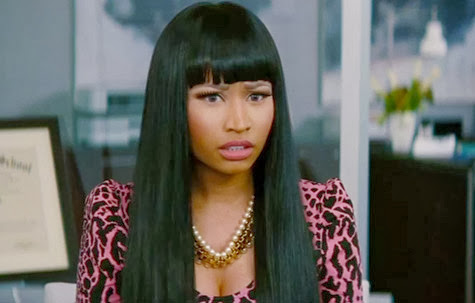 Nicki Minaj is a triple threat rapper, singer, and now turned actress in her debut movie 'The Other Woman' a comedy film directed by The Notebooks Nick Cassavetes in the movie a woman (Cameron Diaz) finds out that she is "the other woman" in an affair. She  teams up with her lover’s wife (Leslie Mann) and mistress (Kate Upton) to get revenge on the cheating husband, played by Nikolaj Coster-Waldau.
Nicki Minaj takes on the role of the sassy assistant, once Cameron Diaz’s character finds out her boyfriend’s not only cheating on her but has a wife, the two women team up for revenge. We can't wait to see the film in theaters on April 25, 2014.

Watch the trailer below and tell us what you think. Do we believe Nicki in her acting skills? Looks at above photo...lol
Email Post
Labels: Cameron Diaz Kate Upton Leslie Mann Nick Cassavetes Nicki Minaj Nikolaj Coster-Waldau