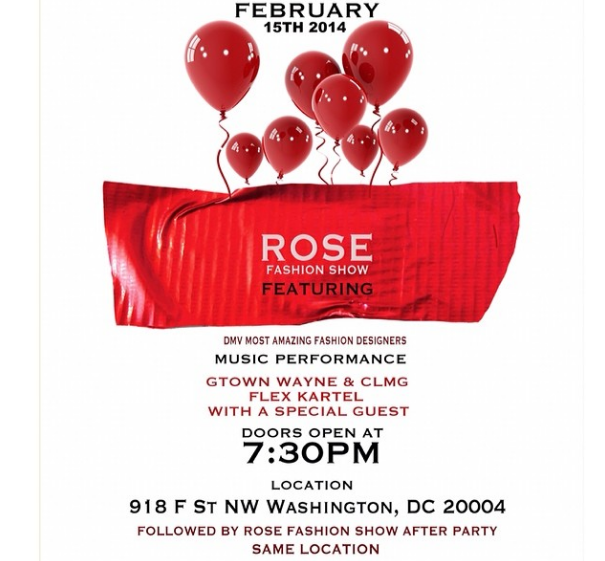 The Rose Fashion show is the talk of the town in the DMV, creator and featured designer Wizzolx has the entire city in anticipation as we await to see what the city has in store. Wizzolx partnered up with a local modeling organization “Model’s Envied” which is ran by Antoine Anderson to create what is expected to be one of the biggest fashion events DC has ever seen. “After…it’s going to leave a mark…it’s going to be history” said the young designer who was born and raised in the district.
Some of the other featured designer such as InQ and Kenz are ready to show the city what they’ve got and can hopefully create some new hope for the non-believers in the fashion there is to offer in this area. It’ll surely be a happy birthday to featured designer InQ as he unveils his new line of custom hand painted pieces. “I was originally contacted to be a model in the show…I don’t mind but I like behind the scenes” said the young designer about his involvement in the show. Kenz, a fabulous and fun brand created by the lovely Travonne says we can expect to see “a lot of color..and a lot of fur” in her collection on the 15th. She wants the world to know “A lot of people try to do fashion but don’t what it’s about”. There are definitely a lot of hopes and excitement to see the work of the vibrant art institute graduate.
Along with great fashion, Rose Fashion show is bringing you all elements or art, including music. Two of the cities hottest up and coming artists Flex Kartel, and the CompLeague (CLMG), will be performing live at the show. The lady lover, Flex Kartel, who recently gained a lot of buzz from his debut mix tape 20FK says “I’m looking forward to a great show” and that he expects all his old and soon to be new fans to “leave pleasured” by his performance. The world also gets to find out more of what CLMG, which stands for composition league music group is all about. CLMG was founded by four young “artist” in the DMV, G’town Wayne, Cash Jones, Don King, and Mikey Bandz. Front man G’town Wayne who recently released his newest EP “The Golden City” says “real music speaks for itself”. All who seem excited to be a part of the show want to let their fans know “to be on the lookout…the league has arrived”.
Last but not least, what would be a great show without a great team? Wizzolx has teamed up with Naomi Valentine of NValentine PR to create a great experience all around. The two first met through a mutual friend and according to Naomi “we met in my kitchen…ever since then we’ve been working” Naomi “adds the finesse” and “structure” to the brilliant concept ideas created by Wizzolx.
Along with creating a platform for talent in the DMV area to come together, Wizzolx will also be premiering his newest collection “Hologram 2.0”. Sources tell us he has been keeping this line under complete wraps, and a secret form everyone. “I haven’t seen the collection myself..your first time seeing it will be my first time as well” says PR Naomi Valentine. One thing for sure, this is an event you don’t want to miss. Saturday, February 15th the only place to be is at Rose Fashion show! General admission tickets have already sold out, and the rest are going quick! You can get tickets on www.eventbrite.com and search “Rose Fashion Show”. Also be sure to stick around for the official after party hosted by DC’s own socialite and model Gia Alexander.