A Farewell To My Fairy Blog Mother NecoleBitchie (PHOTOS) 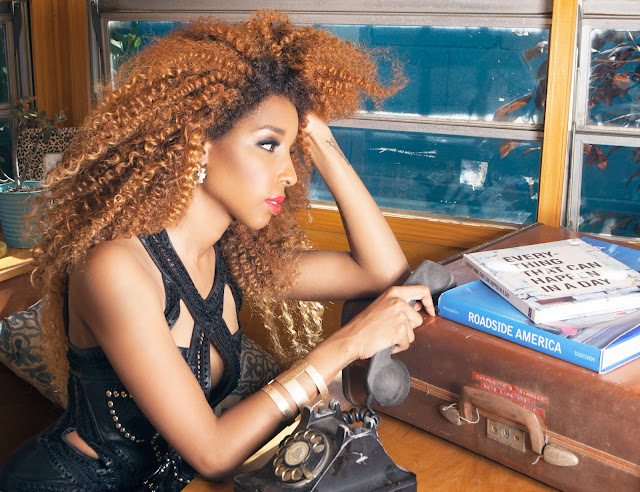 Note: Yesterday my sister posted a farewell post about celebrity blogger Necole Bitchie, she set the tone for many bloggers like myself and is a trendsetter. I remember one of my first interviews as a blogger, and it was with Ms. Bitchie herself. I was very excited and learned a lot from her in a quick period of time . She is beautiful inside and out and I wish her the best.
-Posh


Written By +Jeneba JJ Ghatt
I wish Necole nothing but the best and know we will see more of her in the near future. Check out my sister post below.
Yesterday, one of the original blogebrities, Necole Bitchie (real name Necole Kane) announced that she was leaving the blogging business and will cease running her popular site of the same name.
She says her decision to leave had to do with her internal struggle to be an inspirational leader for young women while running a salacious gossip blog.
Kane wrote in her final post today, titled  ”It’s Time For Me To Move On “:
There is a constant internal struggle between being a character –Necole Bitchie—when I walk out in public, and being the women I know I was meant to be. Eventually, I began feeling like I wasn’t doing enough and I would never reach my goals. I felt stuck! I felt boxed in! No matter how much success people thought I had, or how many pageviews our stories generated, I felt as though I was regressing. There was also a constant struggle of what I thought my audience wanted to see (salacious tea), and what I wanted to post (Inspirational women interest stories.’) I was so exhausted from fighting that battle, that I literally felt defeated and I mentally gave up.
———–
The Cambridge, Maryland native persevered virtual  homelessness, rejection in her pursuit to enter the entertainment industry and the loss of her dad, then her mom at age 16.  She managed to turn a hustle she resorted to when she couldn’t find a job into a media empire covering celebrities, dishing gossip, and breaking news and musical artists. Her popular blog would eventually net millions of viewers weekly.
Kane became a celebrity in her own right and has been featured and profiled onHuffington Post, Baltimore Sun, LA Sentinel, Centric, Cosmo, Ebony. She even won Soul Train Award.
At a time when mainstream sites like Perez Hilton and Just Jared rarely featured celebrities of color and ignored the urban market altogether,  Kane stepped in to fill the void.  Like a student, she studied Perez’s business model and style.
She launched her own blog parody name which is a spin off of  the name Nicole Richie, the daughter of Lionel Richie who then was popular and starring in a reality TV show with Paris Hilton at the time.
The market was ripe and eventually she would be making six figures just from ads on her blogs…just like her muse Perez, but off a demographic he ignored.
Over time, the celebs she once covered would be offering her exclusives and inviting her to join the media team on their world tours.

I met her at a Blogging While Brown blogging conference I spoke at a few years ago.  She headlined along with a few other blogebrities. Despite the fame, Kane appeared to still be quite humble even as other conference attendees crowded around her for photos and autographs.
She kept it real and spoke about losing her voice as a blogger when she became too famous, and overcoming being sued by a photography company and sacrificing her social life to bring her readers the latest celebrity gossip and photos. She was honest and forecoming and the 100+ bloggers in the audience appreciated her candor.
My sister, also a blogger, met her at an event Kane hosted in DC years earlier and after that referred to Kane as her “Fairy Blog Mother.” I think even in her photos, my sister mimics Kane’s signature pouty lipped selfies and portraits.
Just like my sis, many others appreciated Kane’s trailblazing role in paving the way for bloggers, especially young women, bloggers of color and other “no-bodies” who dared to jump online, speak their mind, show off their talent, chronicle their lives, curate interesting stories and in the process, establish a lot of influence over dozens, hundreds, thousands and for some, millions of audiences.
Back in the early years,  bloggers weren’t  respected at all by publicists, celebrities, politicians, the public and main stream media outlets.  Sure we had the conscious bloggers who blogged politics or pop culture and had  a faithful yet small  set of loyal readers.  They blogged to engage their audiences not to make money or make a career out of it.
Kane saw the potential and went another route & soon her empire grew to include a web channel (Bitchie TV), lifestyle site (Bitchie Life), T-shirt line (Born Bitchie) and her personal blog, (iamNecole).
Today, she boasts followers in the millions across several social media platforms.

Others who came after, watched her success and were inspired to follow in her footsteps. If a 20-something young woman who looked like me could do that, why not me, many have thought.

Fast forward 7 years and we’re in a new world where bloggers shape the news cycle, break big news stories that are later picked up by established news outlets.
Indeed, many more of us are much appreciated and respected for our role in the mass and social media.
Imagine…
Today, the President of the United States is doing exclusive interviews with YouTube stars that he doesn’t grant to mainstream reporters.
Major pop stars like Rihanna skip MTV and are premiering their latest videos on Vevo and Snapchat (Madonna)
Instagram models and Instagram celebrities are earning more than top Runway models.
Brands are paying popular Viners to promote their products in 5-7 seconds increments.
YouTube gamers like PewDiePie are netting more weekly viewers than some broadcast TV shows.
Reality TV stars are clamoring to be mentioned or covered in gossip blogs.
Major cable networks are quoting random popular Tweeters and embedding their comments in their stories
2016 Presidential candidates are streaming their first campaign rallies on Periscope.
News outlets daily are quoting random popular people on Twitter as well and embedding their status updates in social media in their stories as support and sources .
In sum, gone are the days when the average man on the street or the rising mom blogger or average contributor on social media site was not considered credible, and were readily  dismissed.
Granted, many still look down on bloggers and some journalists can’t stand the fact that bloggers carry so much weight and are so influential without having to follow all the rules of traditional journalism like having to write in AP style, be neutral and cite original sources.

Nonetheless, the new digital era was paved by people like Necole Bitchie who dared to dream big.
In a 2011 Black Enterprise magazine feature that asked her how she measures success, Kane said:
How many people I inspire and motivate everyday. When I first started working with my publicist Christina one of my main things was even if I did interviews and get in magazines I don’t want to get into them just to say, “Hey, look what I did with my blog.” I really wanted the person reading to know the back story and the struggle and the obstacles I had to overcome to even get here in three years, so every time someone comes on Twitter and says, “Girl, I just read your story and you inspire and motivate me,” that’s how I measure my success, not by how much money I make or how many people read the site.
She did and  has inspired.
For that I, and others in the game,  thank her for her role in history and wish her well on her next endeavors.
Email Post
Labels: Bloggers Celebrities NecoleBitchie