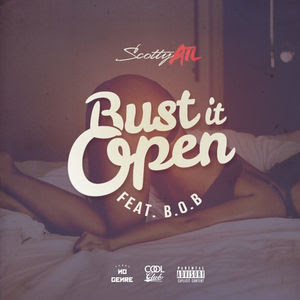 Scotty ATL comes through today with a low-key banger, featuring fellow Atlanta native B.o.B. Bobby Ray has been very generous with his music as of late, not only giving away his new album Psychadelik Thoughtz for free, but dropping off a few joints since then. Today he takes a backseat to Scotty ATL's jam, "Bust It Open," which is a twerk-ready anthem. The bouncy production comes from Blac Elvis. The record itself will land on Scotty ATL's upcoming project, which is slated for release at the end of the month. Keep your eyes peeled.

Last we heard from Scotty, it was alongside Big K.R.I.T. and 8 Ball on "Grippin Grain."

It's good to hear something different outside of trap music for once. Check it out and let us know what you think of Scotty ATL new single 'Bust It open'.